Wabasha family embraces winter at Coffee Mill Ski Area, inspires others to do the same

Wabasha family embraces winter at Coffee Mill Ski Area, inspires others to do the same

There are two ways to approach winter in Minnesota. You can curl up under a pile of blankets, sip a mug of cocoa and binge watch your favorite show on Netflix. Or, you can take a cue from the Skelton family and lean into the cold. For them, skiing has become more than way to pass the time; it’s become a way of life. 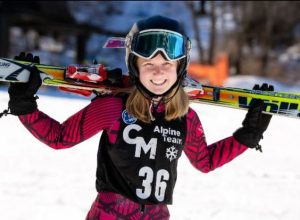 Thirteen-year-old Hope Skelton effortlessly glides down the Chippewa, one of the gentle slopes at Coffee Mill Ski Area in Wabasha, which recently opened for the season. Her dad, Todd, spent his youth skiing the same hills, and her mom, Bridget, is on the ski patrol, so it’s no surprise Hope has found a home here. In fact, she started skiing when she was just two years old.

“When you’re riding on the chairlift with your child or spouse, you have their undivided attention for the whole ride,” Bridget says. They call their time on the slopes FFF: Forced Family Fun. “It’s a family sport. We can spend the whole day together, being active outside.”

Hope’s older sisters Chelsea and Erinn joined the ski team at Coffee Mill while they were in high school, further instilling this family tradition. Now, it’s Hope who races down the slopes, while family and friends cheer her on.

“The best part of the ski team is that they accept any student and work with them where they are,” Bridget says. “It gives them the confidence to grow.”

Head Coach Dave McCleod learned to ski as an adult, desiring to be active during Minnesota winers. 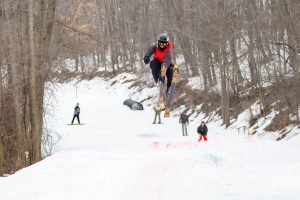 “Because I don’t have a racing background, I can focus more on teaching skills, empowering the kids, and having fun,” Coach McCleod says. “We try to keep things safe and fun — while doing a little racing on the side.”

So fun, in fact, that former ski team member Fionna Higgins — who graduated in 2019 — is returning as a coach. The freshman at Rochester Community Technical College first started skiing when she was about five years old. She’s been on the slopes ever since.

“I loved being on the ski team,” Fionna says, emphasizing that the hills at Coffee Mill are perfect for beginners because they’re not too steep. “I got to know everyone. I loved helping the younger kids learn the basics.”

When the team isn’t practicing or racing, you can probably still find most of the skiers on the slopes. Because even though the winter may be cold and blustery, they’re charging headfirst into the season. Day — or night.

“We love night skiing,” Bridget says. “It’s so beautiful to ski under the stars and breathe in the crisp winter air.”